Duchess Harris is on sabbatical. But that doesn’t mean she’s taking a break. The last time the Macalester College American Studies professor took leave from the classroom, she unearthed documents in NASA’s archives showing her grandmother’s role as one of the “hidden human computers” working at Langley Research Center. This time around, Harris is working on a series of books to teach elementary schoolkids about lesser known moments in black history. She’s also: celebrating th 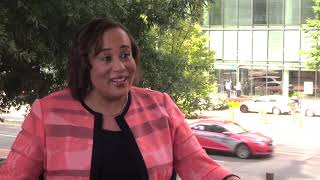 Harris Featured in PBS's "To The Contrary"

In Black Feminist Politics: From Kennedy to Trump, Professor Duchess Harris explores how black feminism is influencing politics and social media under the Trump administration.

Two years ago, when President Trump was still on the campaign trail, he told an audience during a rally at Minneapolis-St. Paul International Airport that Minnesota had “suffered enough” at the hands of Somali immigrants, who began moving there as refugees in the early 1990s... >> Read the full article now!

Inside Her Story: Every Vote Matters

There are a number of Black women running for office all over the country. Jacque Reid goes Inside Her Story with Dr. Duchess Harris, author of Black Feminist Politics From Kennedy To Trump. Stacey Abrams is running for governor of Georgia and Harris says voter turnout has been at an all time high, which is a good sign. >> Listen to the interview online